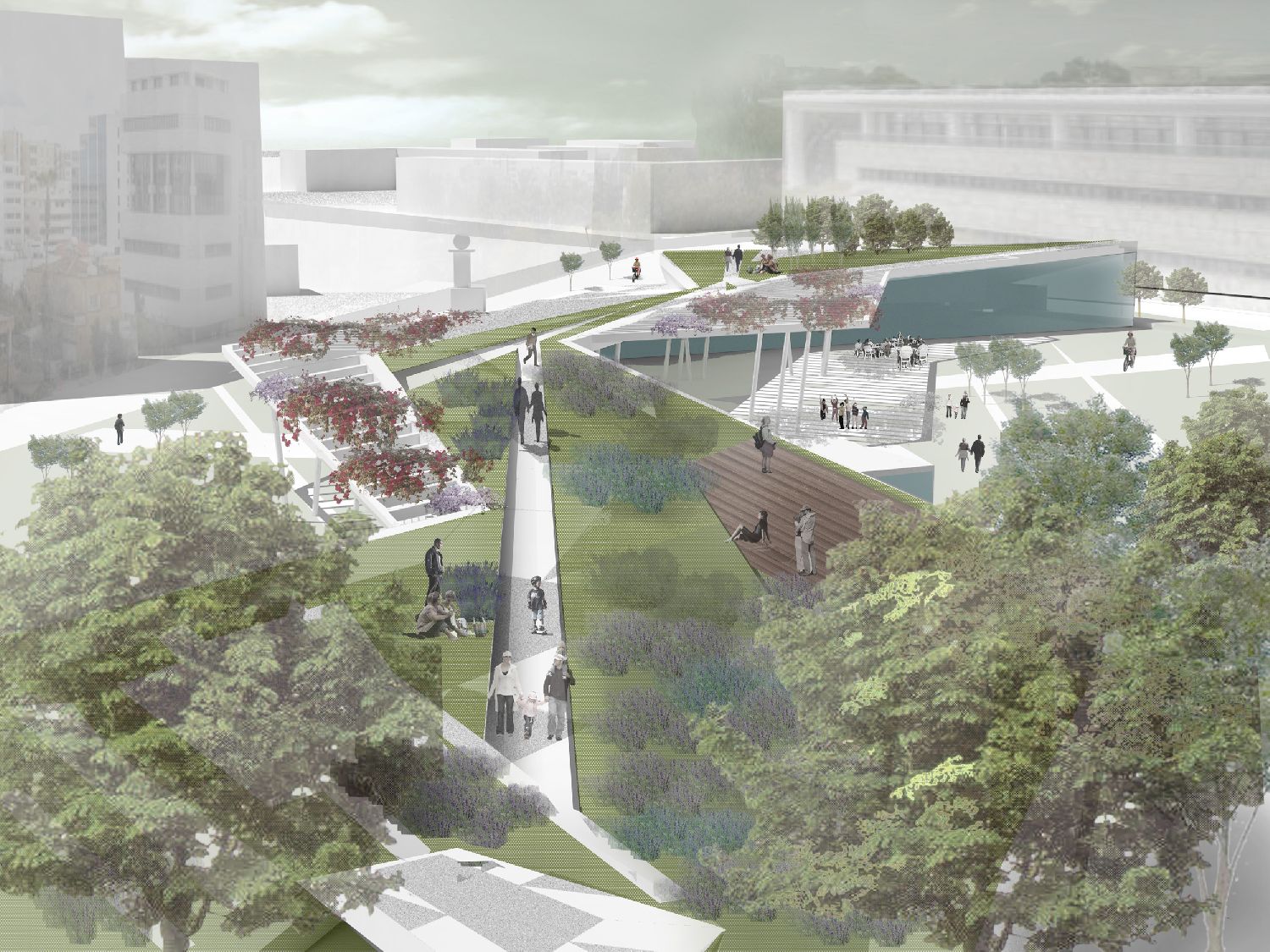 ERGO 7 ARCHITECTS won the 3rd prize in this open European Architectural Competition about the redesigning of the area of the old GSP stadium in the center of Nicosia, organized by the Department of Town Planning of Cyprus in October 2011. The objective of this competition was-- more -- the creation of an urban park / square accompanied by the necessary facilities to serve as a place of recreation, social gathering and holding of public events, as well as the construction of underground parking facilities.
The GSP new square is an intermediate link in the new urban spine of Nicosia's public life. It is flanked by the two most emphatical urban squares of the city, Eleftherias square on the east - imposed with heavy historic value as the entrance/link to the city within the walls- and the New Parliament Square to the west imposed with official civic value.
GSP area is loaded with relatively less urban and historical burden and can hold a more playful role, in tune with the place's historical identity as it has been the city's main playground and focal activity venue for the past century.
Activated by the memory embedded into the place (the memory as energy, not as nostalgic images), connecting and integrating GSP as a hub into the urban experience of the 'Alea' running through the city, and, relating it to the urban flow of adjacent uses (Theatre etc), the WWVP (Walk-Watch-View and Play) inspiration concept evolved:
W 'Walk' manifesting the pedestrian and stroll character of the 'Alea' to which GSP new design intents to add special experiences.
W 'Watch' for focusing on the visual interaction between the crisscrossing pedestrian users and between the same users and the city, through the change of levels and viewing angles provided by the elevated landscape and walkway.
V 'View' for the multiple ad hoc events and cultural performances that can be intricated by and take place in the slopes and plateaux of the urban GSP landforms.
P and 'Play' as both the summarizing theme/hand stroke for the delineation of the design on one hand, and, on the other hand as the final spirit we want to infuse into the new identity of the urban GSP place in accordance with the historic essence of its past identity.
Play: as if the energy of the playing field, the passing of the ball between the two goalposts/nodes, the zig-zag furious movements of the players, is x-rayed into a festive geometrical pattern that is underlayed into our design.
Shade and Shadow
Experiencing exterior spaces in the Cyprus' Mediterranean climate is an experience of multiple shade and shadow manifestations. Shade of various densities and shadows of varying patterns are to be orchestrated as the central material of the composition to create a protected urban exterior space sheltered from the direct sunlight, creating appropriate microclimate for all-day activities.
Components
a diagonal movement is introduced, following the shortest direction from walled city centre to Theatre entrance, extending the neighborhood geometrical pattern into the site anchoring the synthesis with two fixed nodes, as elevated places at the two corners bridging the two nodes over the central part of the square with a wandering elevated landscape, to create a central shaded area below creating a bifold landscape inhabiting the main square with the programs main commercial and other uses under the unifying shelter the overpass and the overpass pergola-like wings provide.
Underground Parking
(a)View. An active livable inner urban space, where takes place a part of the people's journey to and from their everyday destinations, is what a parking structure of this scale should be, not merely a functional effective temporary underground storage of 1500 cars.
(b)Precedence. To achieve this the building type of Subway Stations is engaged as an equivalent prototype where the public space (square) flows underground into the first subterranean level -the distribution and information level- before the branching down to the platforms/parking sectors.
(c)Light, people movement & orientation. A linear core in the form of five storey high glass prism bisects as a light shaft all parking levels both vertically and horizontally. Thus an orientation focal core is created, holding main vertical people circulation and directing daylight down to all levels.
(d)Circulation After the control points at level -1, parking circulation rolls down smoothly through ramped parking sections, to all levels. Fast exit is achieved with separate exit ramps at both sectors. 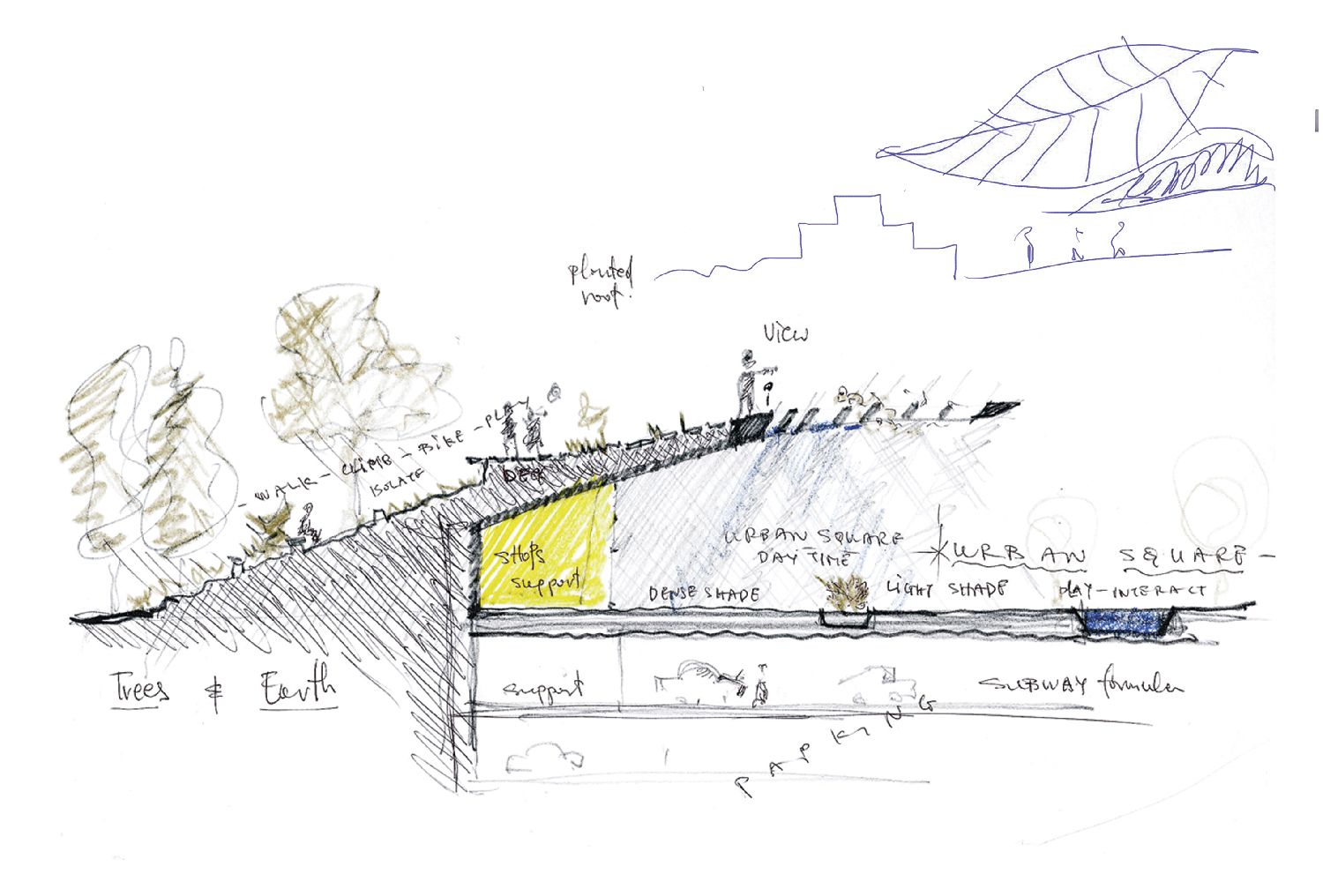 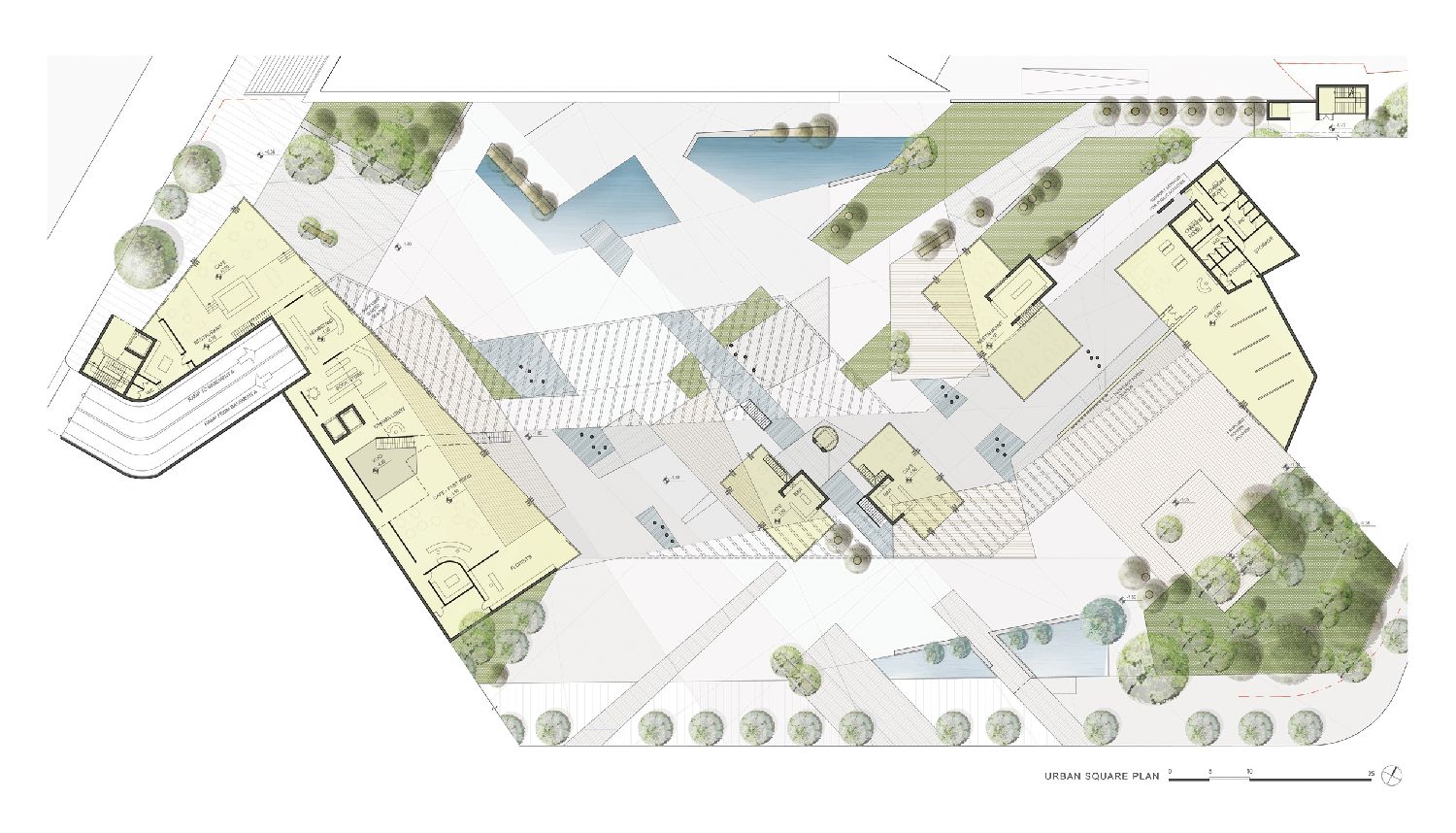 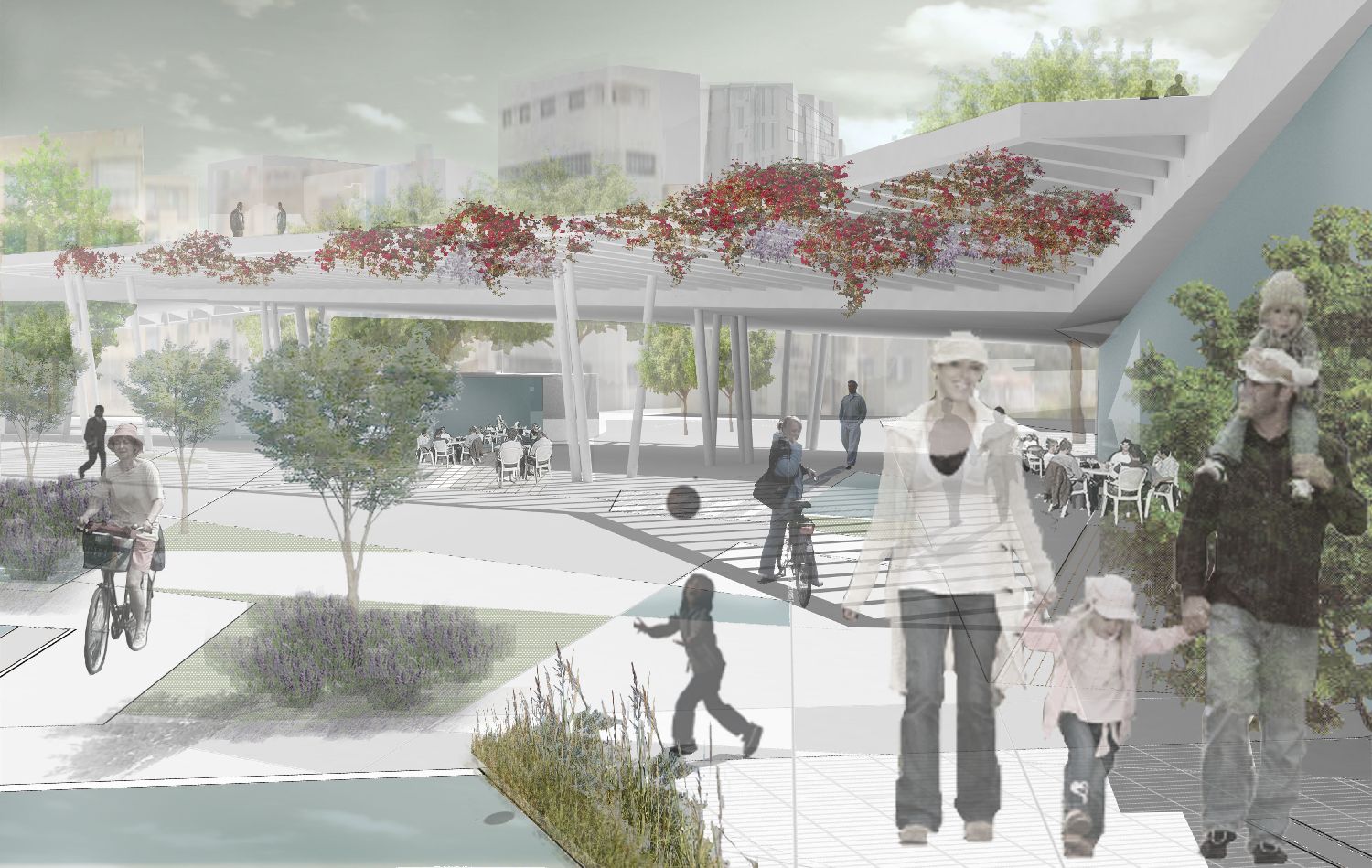 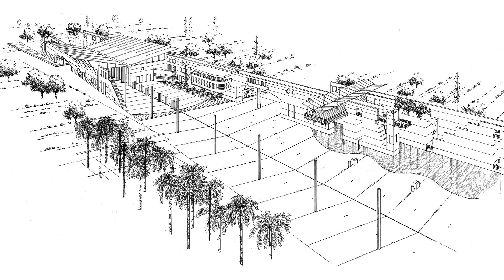 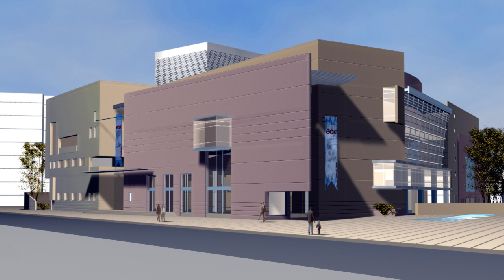 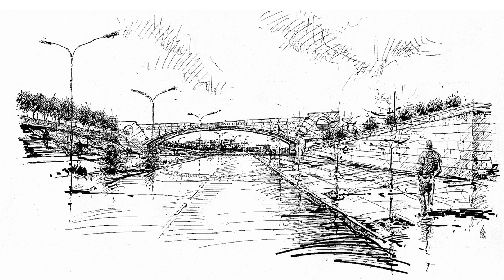 Second prize winning entry for the design of an aerial footbridge over the Nicosia... 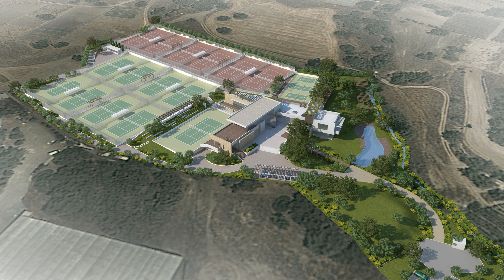